We thought the phrase was born in just 1962. We were wrong. 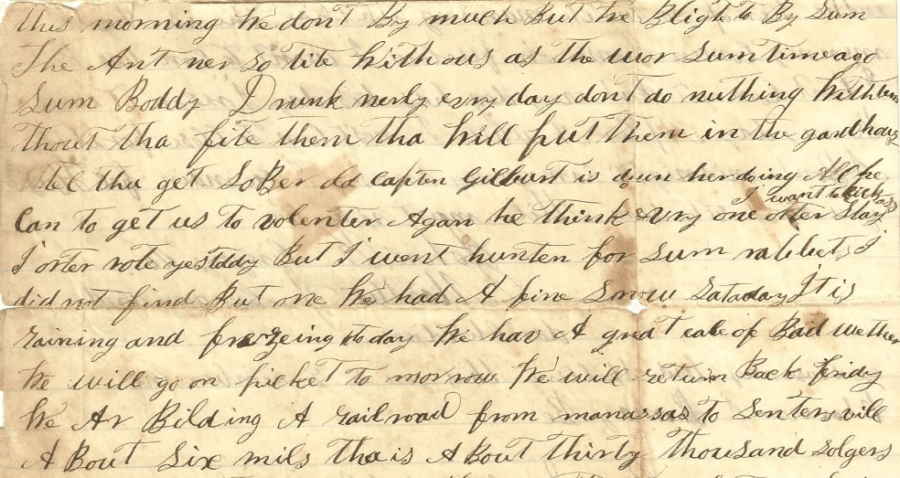 University of GeorgiaThe 1862 letter by John B. Gregory.

The phrase “kick ass” may seem like a modern invention, but a new letter shows its usage nearly 100 years before we previously believed the phrase was invented.

Slate reports that last week Jonathan Lighter, author of the Historical Dictionary of American Slang, discovered the phrase “kick ass” in a letter from a soldier fighting in the Civil War about a century earlier than when linguists believed the phrase first emerged in the English language.

The letter was part of a recent digitization of Civil War archives by a team of historians and linguists.

The phrase appears in an 1862 letter from Confederate soldier John B. Gregory, of the 38th Virginia Infantry, to his neighbor back home in Pittsylvania County, VA. In this letter, Gregory relays his experience in the army and his opinion of his fellow soldiers and friends back home.

Between the lines, “old capen gilburt is doun her doing All he/Can to get us to volenter Agan he Think evry one orter stay” (i.e. “Old Captain Gilbert is down here doing all he can to get us to volunteer again; he thinks everyone ought to stay”), Gregory writes the solitary phrase, “I want to kick ass.”

University of GeorgiaThe phrase “I want to kick ass” in the letter.

Though the removal of this phrase from the rest of the text makes interpreting its meaning more difficult, the phrase seems to be in line with the modern use of this slang term. In Lighter’s Historical Dictionary of American Slang he defines this meaning as:

Kick ass [or (euphem.) butt or tail] 1. to enforce one’s authority or otherwise assert oneself mercilessly or pugnaciously; (also) (prob. the orig. sense) to subdue others by beatings…
2. to inflict punishment or defeat (in general). — usu. considered vulgar.

While it is possible that Gregory was instead referring to specifically kicking the ass of “Old Captain Gilbert,” the phrase’s isolated position makes it seem like a more general statement. If so, this would predate the previous earliest known account of the use of this phrase, cited by Lighter in his dictionary, a 1962 book by WWII vet John Oliver Killens.

In the book, Killens wrote, “Them Japs are kicking asses and taking names.”

This newest occurrence of the phrase predates Killens’ quote by 100 years.

While the exact usage of the phrase in this context is up for debate, it appears that this letter shows that some slang terms we believe are modern may be much much older than we ever imagined.

Next, check out these photos of Civil War veterans that bring history to life. Then, learn how the first humans lived in North America 115,000 years earlier than we thought.