26 Weird Holidays And Bizarre Festivals From Around The World

From Japan's Kanamara Matsuri penis celebration to the gigantic La Tomatina food fight in Spain, experience some weird holidays and bizarre festivals from around the world. 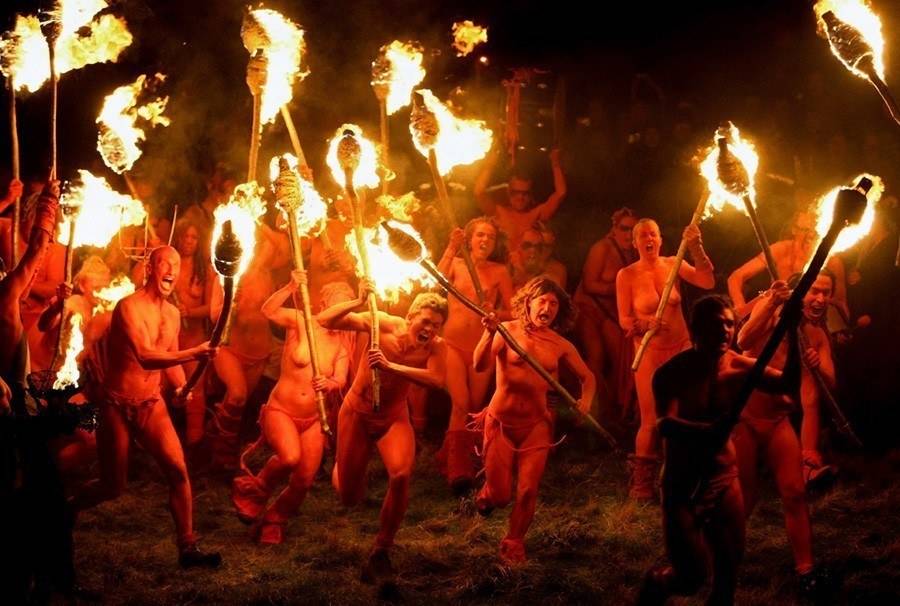 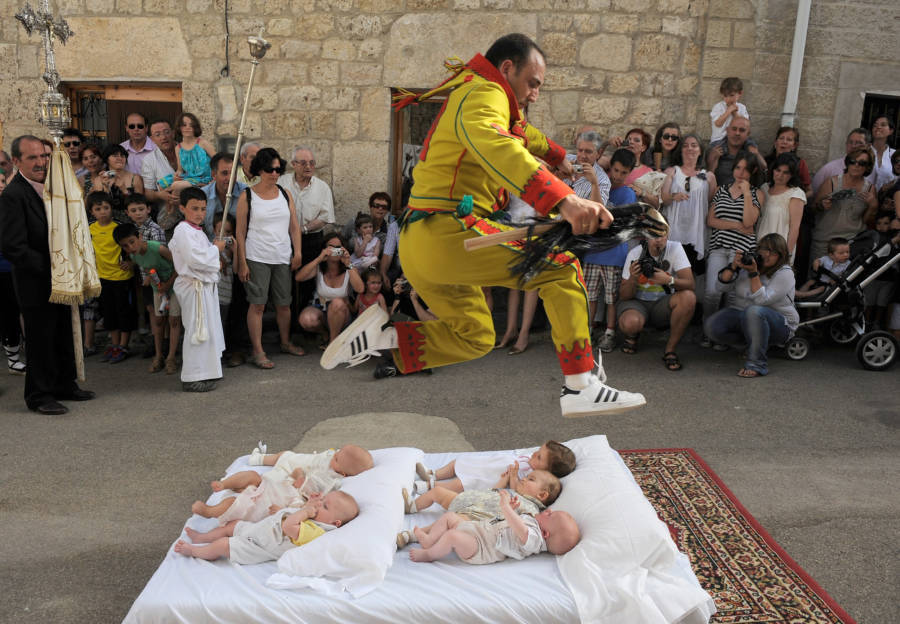 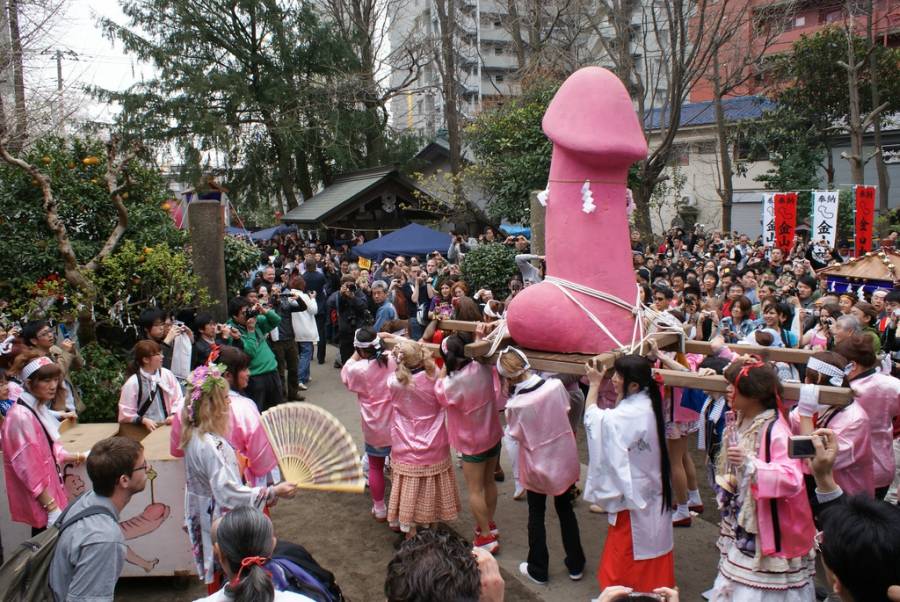 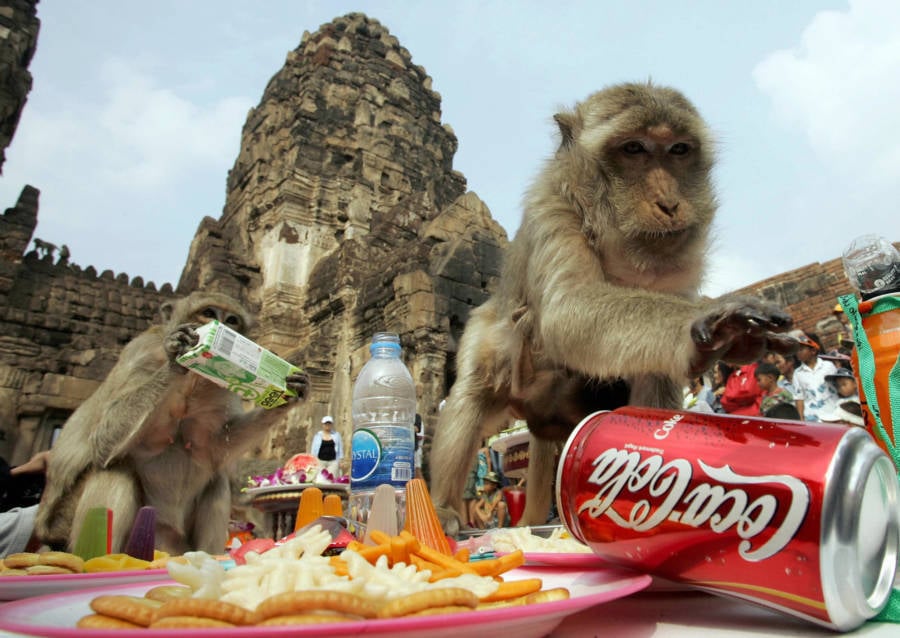 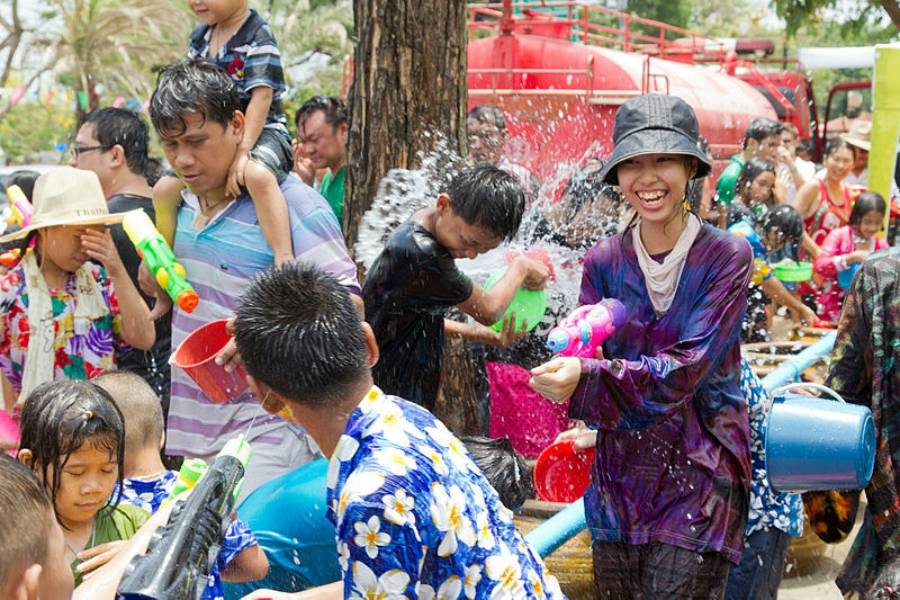 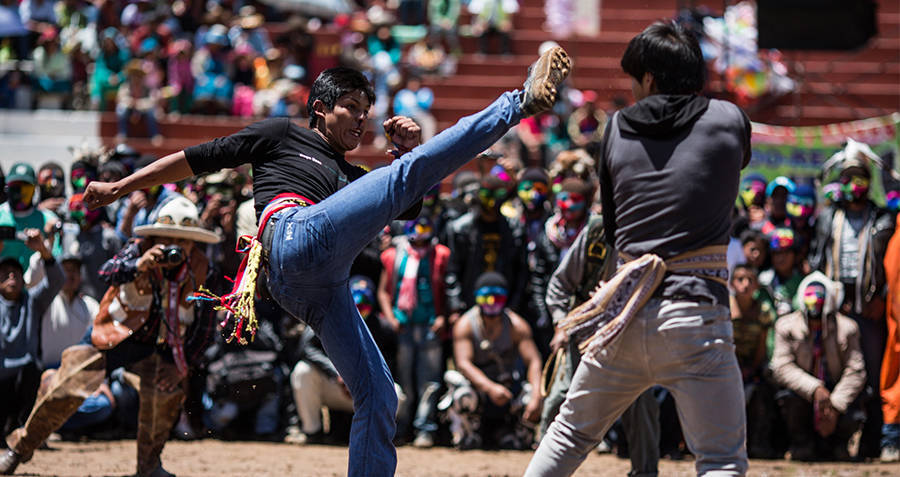 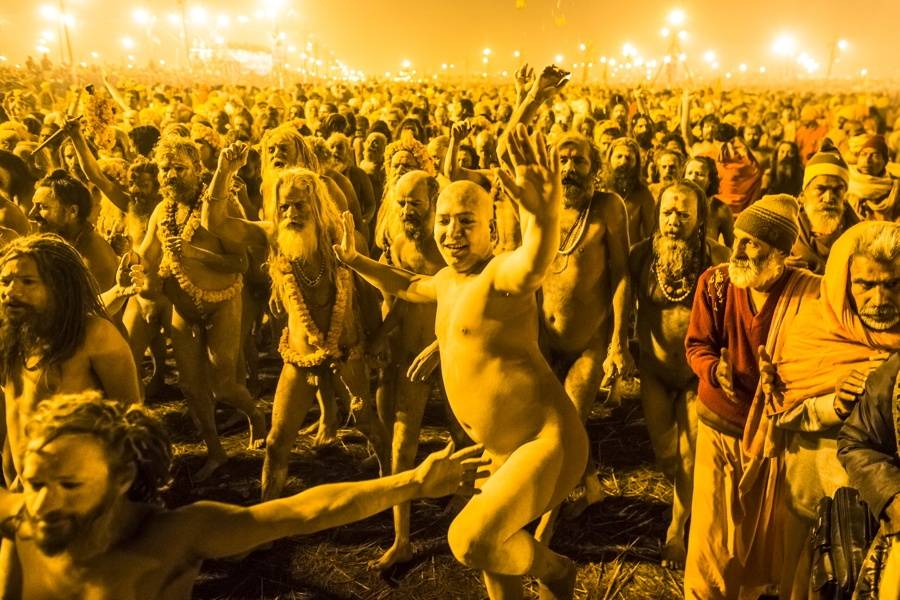 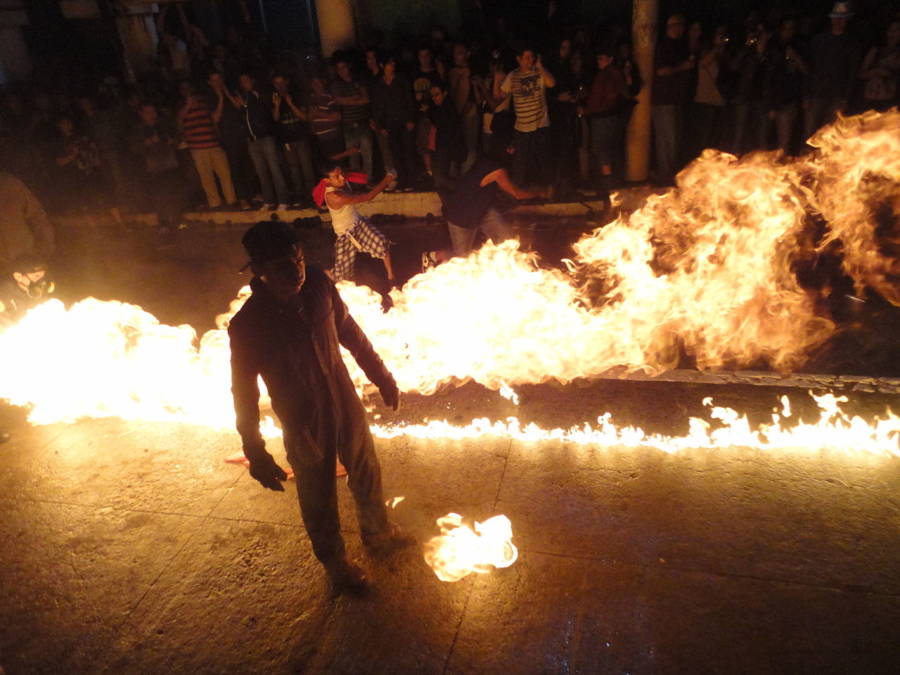 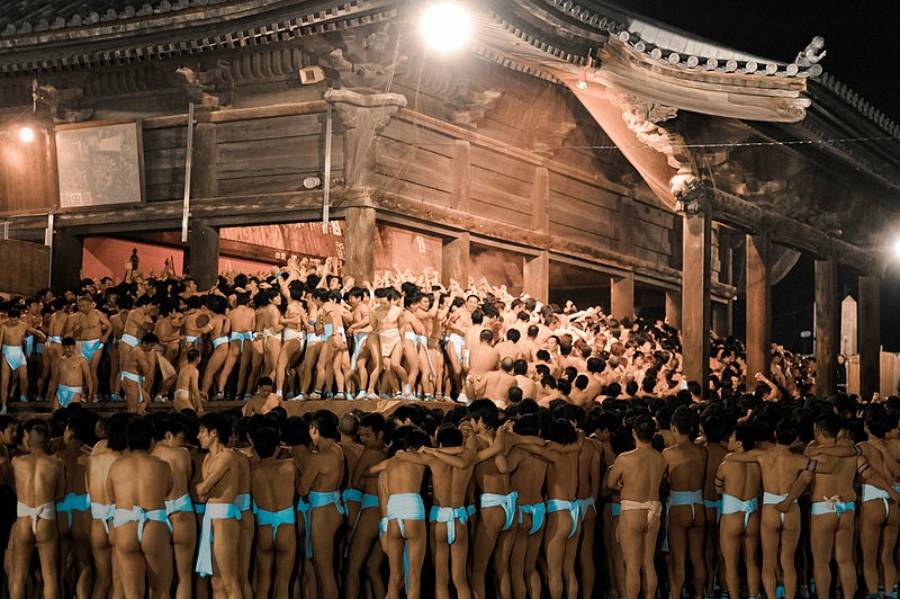 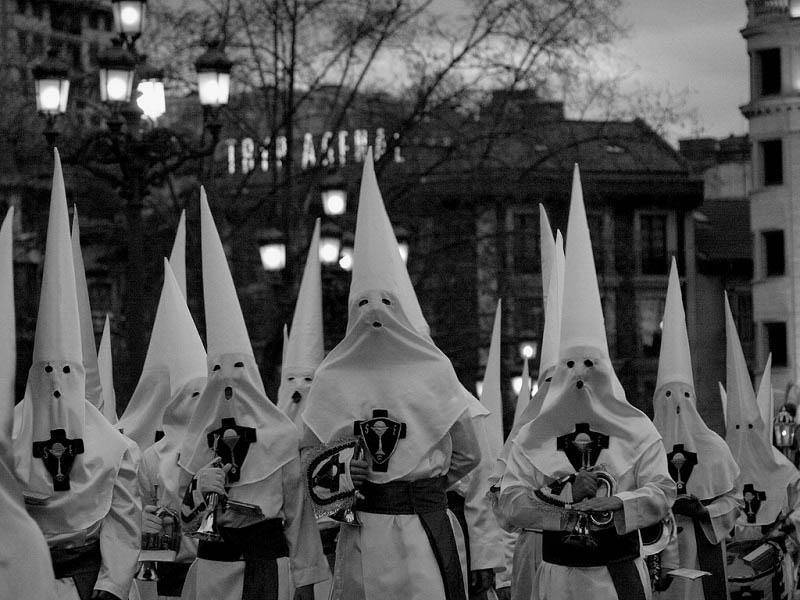 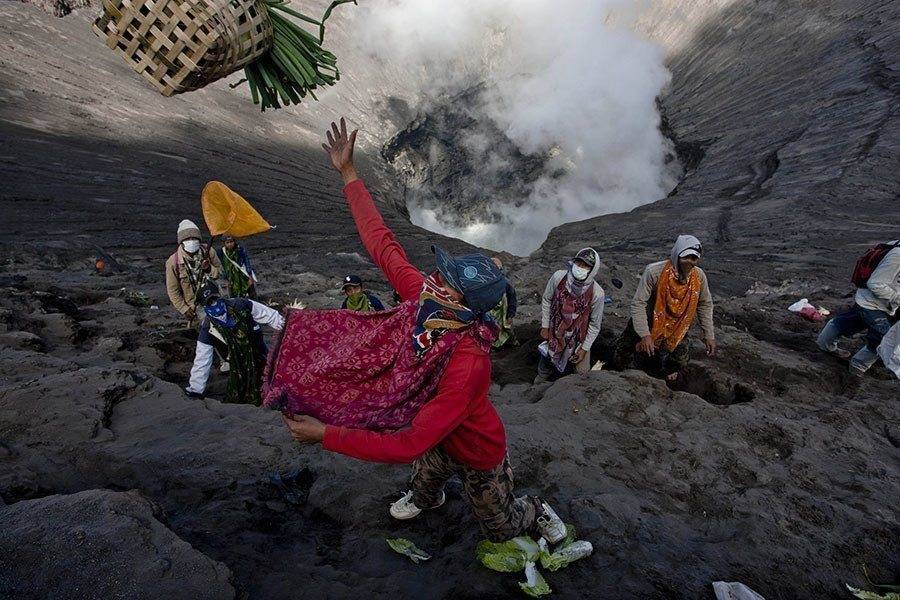 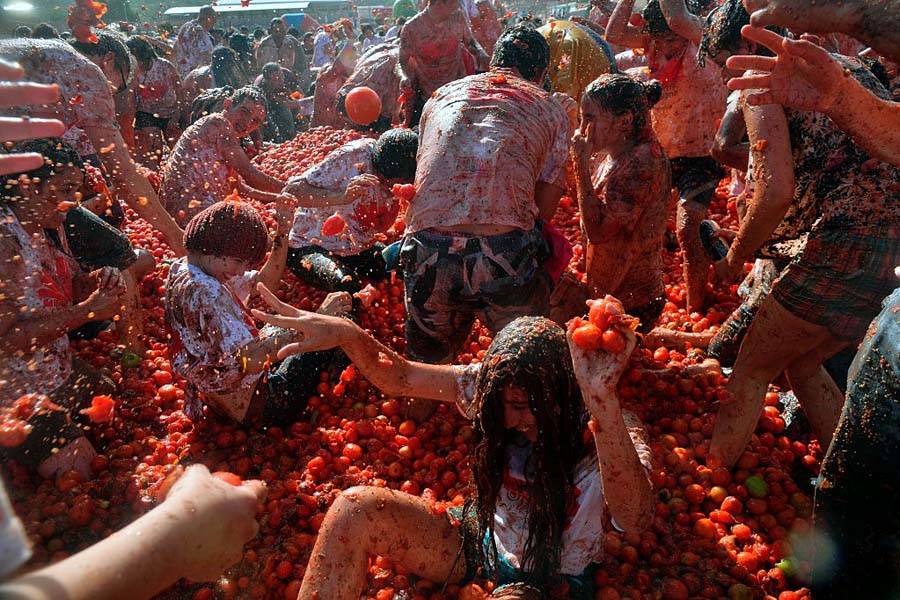 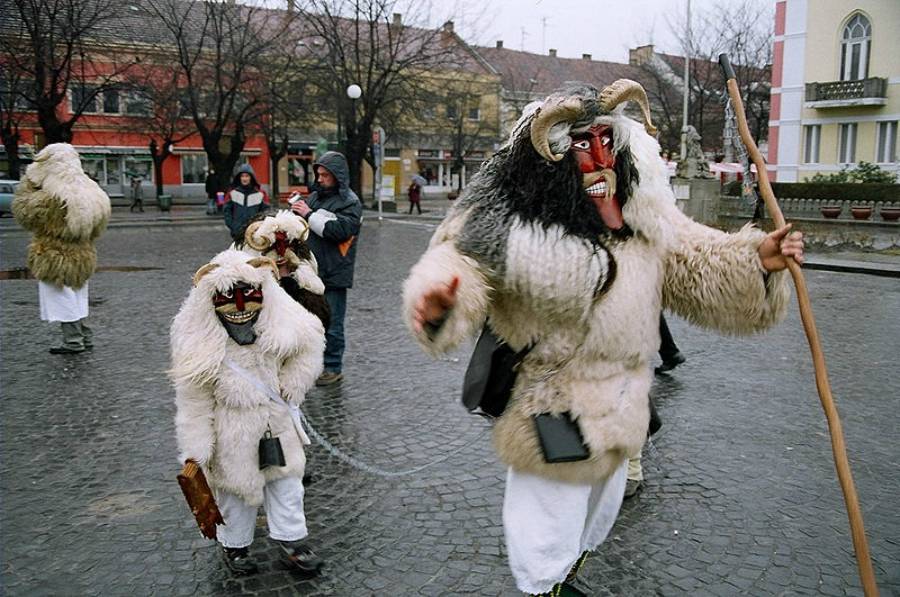 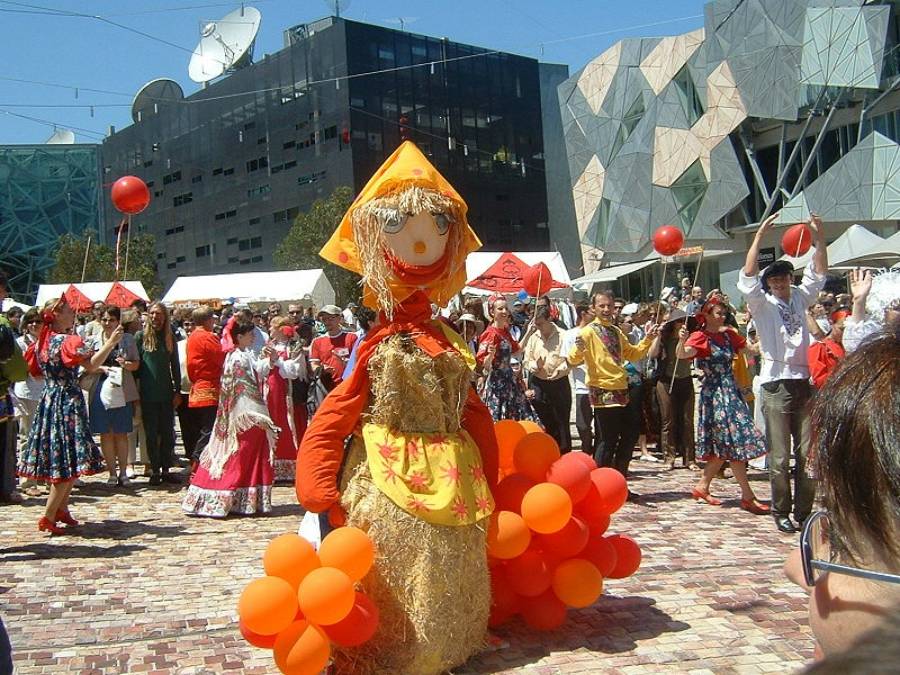 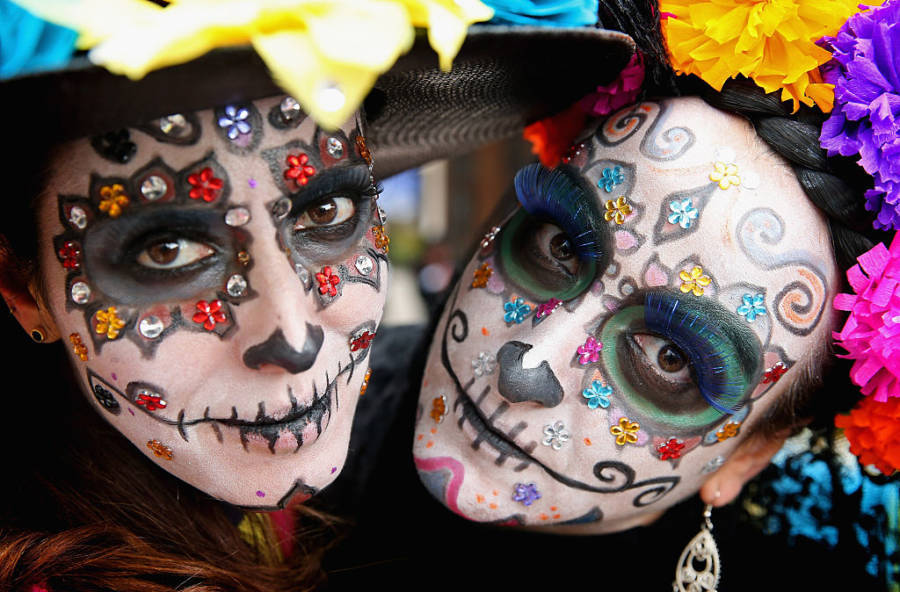 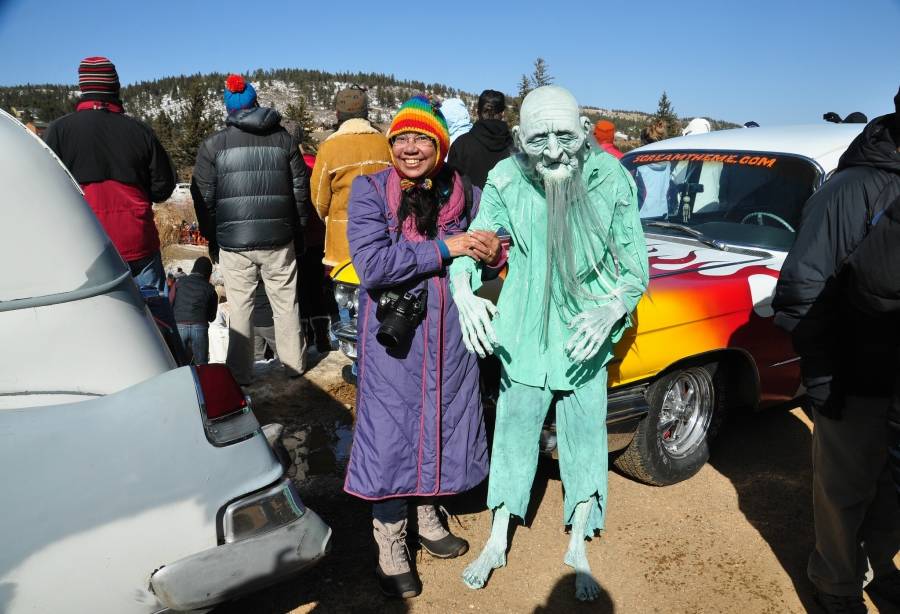 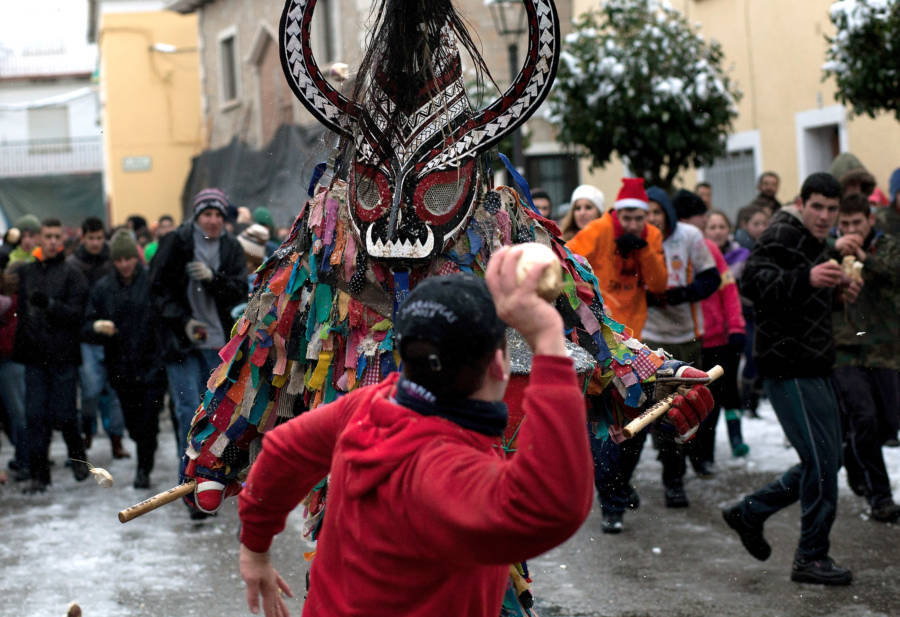 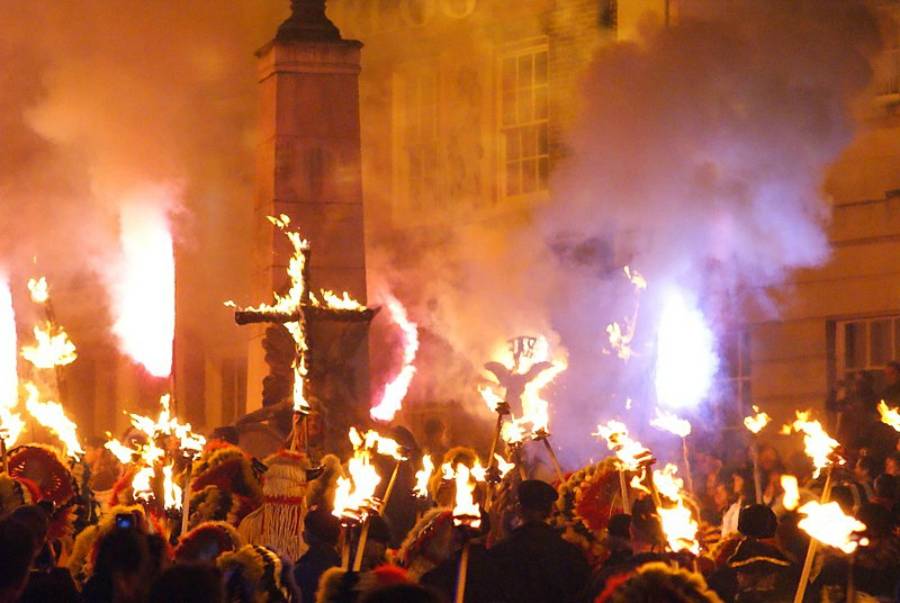 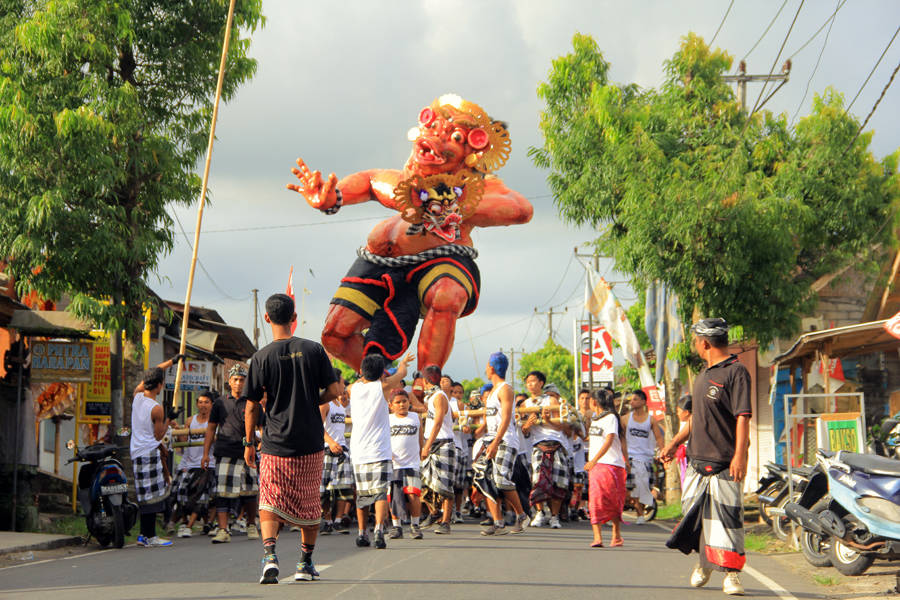 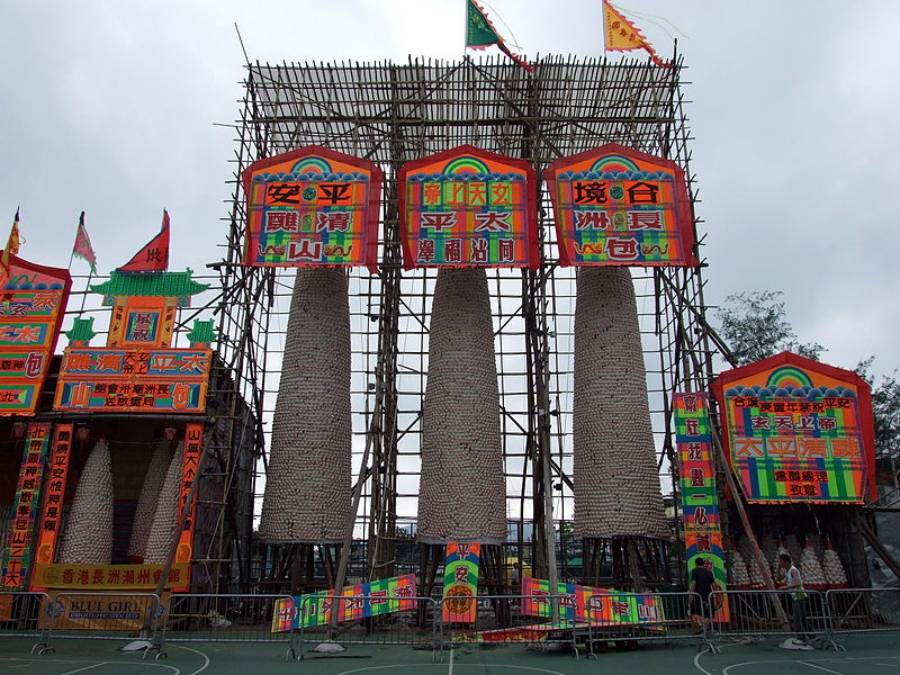 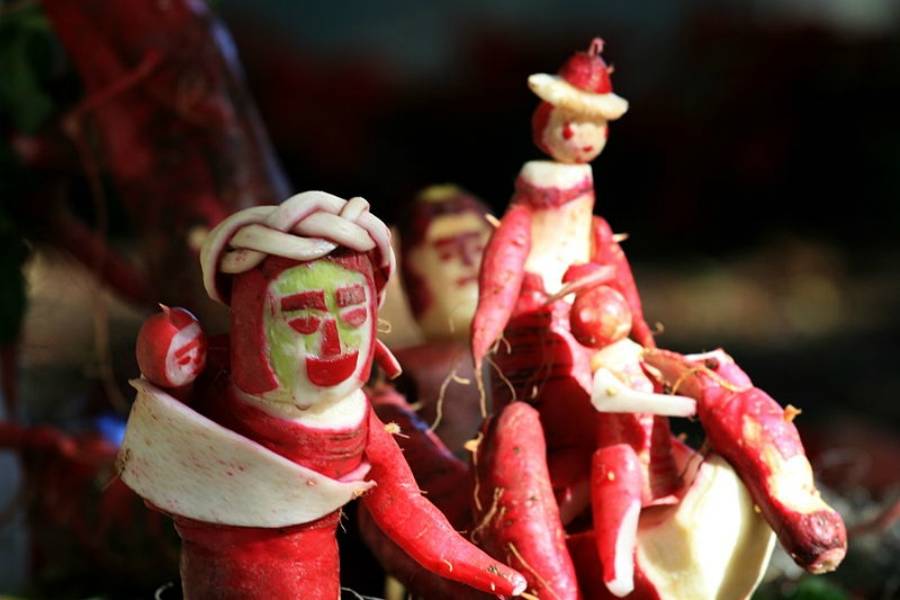 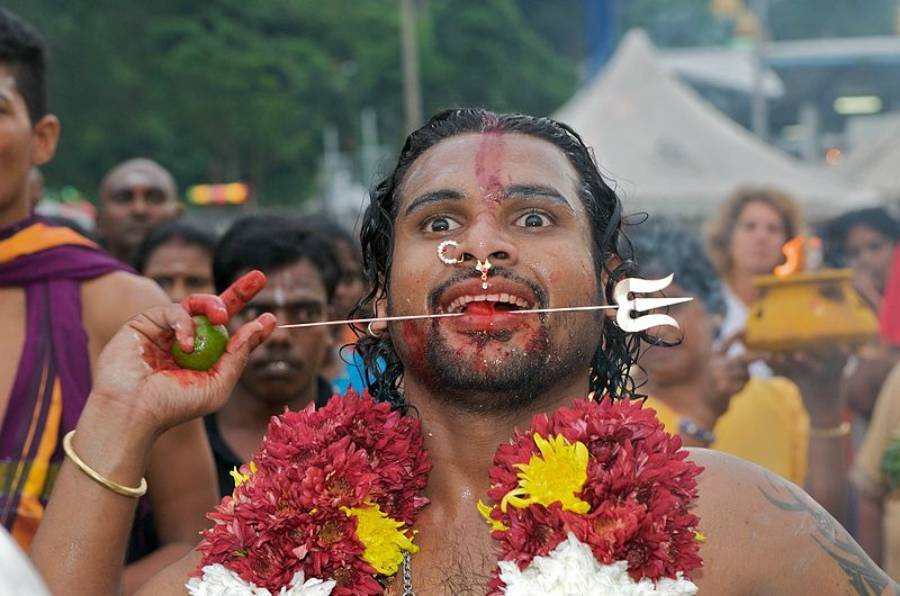 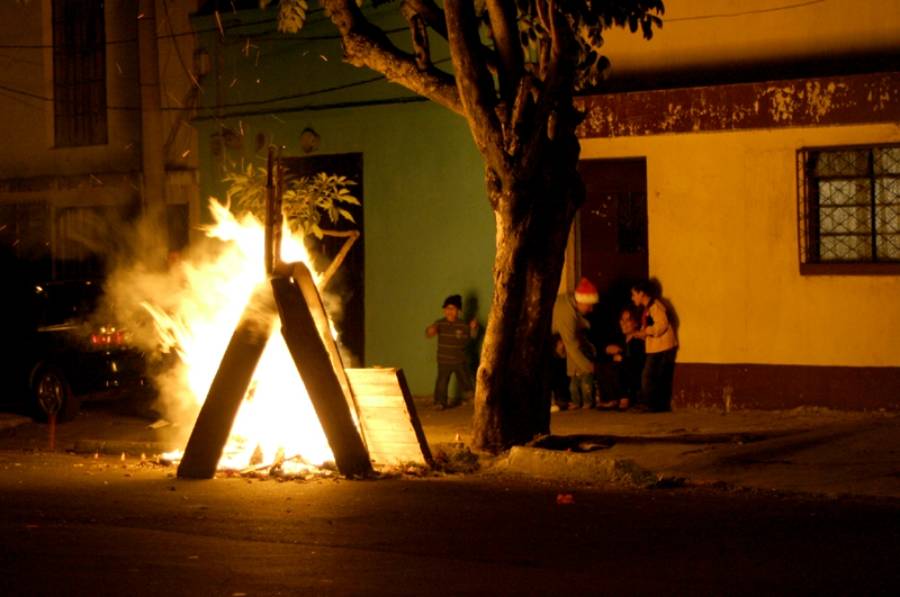 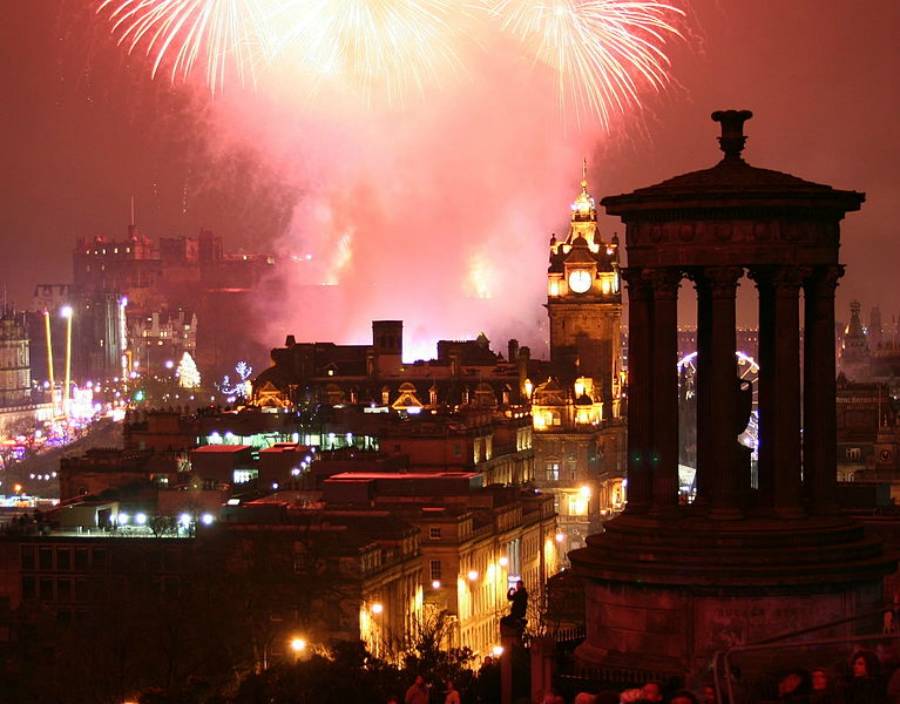 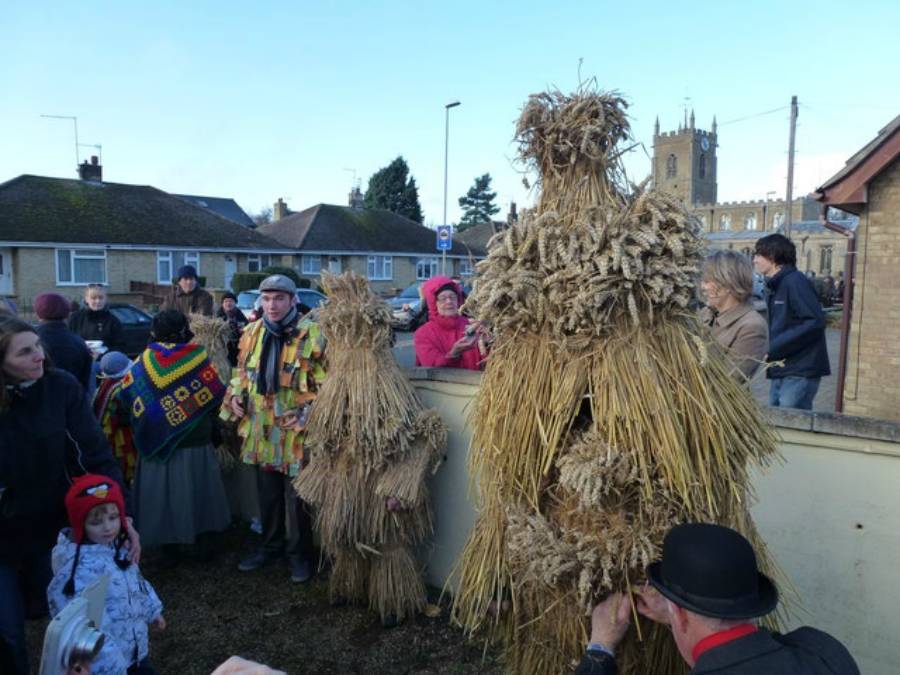 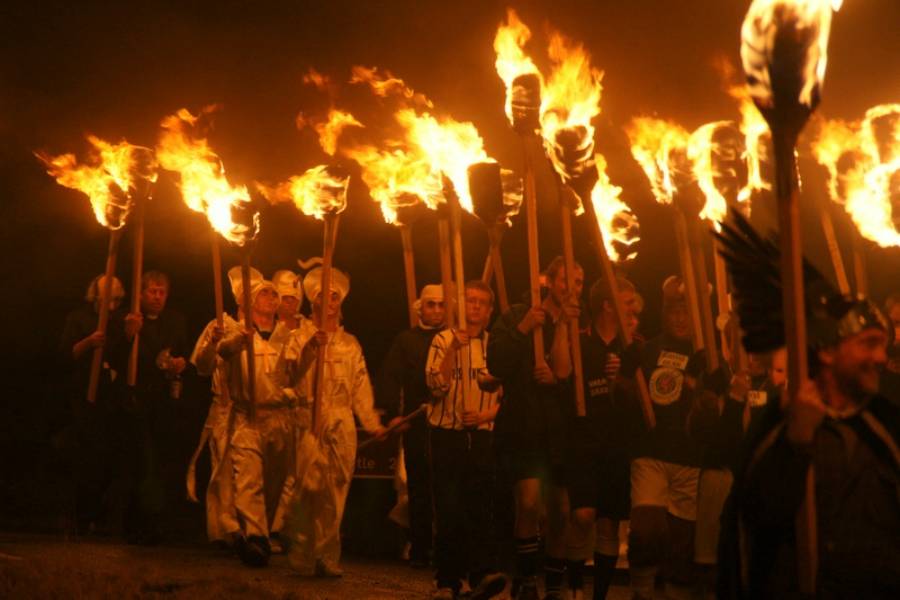 During the Beltane Fire Festival, held in Scotland each April, hordes of mostly nude revelers don body paint, light torches, and set bonfires as part of a raucous celebration meant to mark the coming of summer.Getty Images
2 of 27

Some Spanish Catholics celebrate the feast of Corpus Christi each spring by having men dressed as the devil jump over babies. This centuries-old custom known as El Colacho is believed to absolve the newborns of original sin and protect them from evil.Denis Doyle/Getty Images
3 of 27

Each spring the city of Kawasaki, Japan holds the strange penis festival of Kanamara Matsuri. According to a local legend, once upon a time a demon fell in love with a young woman and hid inside her vagina, biting off the penises of two men on her wedding night. However, a blacksmith helped the woman by making an iron phallus that broke the demon’s teeth and the iron phallus was thus enshrined. Thus, on the day of the festival, a parade of phalluses marches by and revelers can buy phallus-shaped candies and treats. Takanori/Flickr
4 of 27

Monkeys have it good in Lopburi, Thailand. Every year during the Monkey Buffet Festival, the furry creatures are treated to an exceptional feast of four and a half tons of fruits, vegetables, and candies at the ancient temple of Phra Prang Sam Yot in celebration of one brave monkey who, according to local legend, saved a bride from a ten-headed demon.Porchai Kittiwongsakul/AFP/Getty Images
5 of 27

The Thai Songkran Festival marks the beginning of the new year as participants use water to wash away the negativity, bad luck, and sins of the past year. In big cities, people take to the streets where huge water fights ensue among strangers.Wikimedia Commons
6 of 27

The name Takanakuy means "to hit each other" in the local language — and that's exactly what the Peruvian participants in this festival do. Each Christmas, locals physically fight each other in organized bouts as a way to resolve conflicts.Getty Images
7 of 27

The mass Hindu pilgrimage of Kumbh Mela, in which largely nude participants bathe in one of India's sacred rivers to rid themselves of sin, represents the largest human gathering on Earth. More than 120 million people attended the 2013 festival.Daniel BerehulakGetty Images
8 of 27

Every August, residents of Nejapa, El Salvador light blazing fireballs and toss them at each other in the streets. This century-old tradition commemorates the devastating eruption of a nearby volcano (which was said to have sent fireballs soaring through the air) long ago. Wikimedia Commons
9 of 27

During the Hadaka Matsuri festival in Japan, half-naked men struggle with each other in an attempt to get a hold of sacred charms, thrown into the crowd by a priest, which will guarantee a full year of good luck. The man who manages to wrangle the charm out of the opponent’s hands must stuff it into a special wooden box filled with rice before he is guaranteed a year of happiness. The festival dates back hundreds of years to when a priest would throw paper talismans to his worshippers who would then supposedly experience a happy year.Wikimedia Commons
10 of 27

Catholics around the world engage in elaborate rituals to celebrate Semana Santa, the holy week preceding Easter. But some believers in Spain take that pageantry to a level that some see as unnerving, with hordes of white men in Ku Klux Klan-like robes march through the streets.Flickr
11 of 27

Every year the Hingu Tenggerese people of Probolinggo East Java celebrate the Yadnya Kasada festival during which they make their way to Mount Bromo, an active volcano. There, they fling their possessions, such as cattle and crops, into the mouth of the volcano, hoping that this sacrifice will rid the community of disease and other disasters.Ulet Ifansasti/Getty Images
12 of 27

Each year, some 20,000 people in Buñol, Spain take to the streets to throw about 150 tons of tomatoes at each other. What started as a spontaneous food fight at a local parade about 70 years ago has since been commemorated with an organized tomato battle every year since.GUILLERMO LEGARIA/AFP/Getty Images
13 of 27

The Busojaras is a festival celebrated in Mohacs, Hungary at the end of the Carnival season. The celebration involves dressing up in traditional masks and woolly cloaks, masquerading, dancing and listening to folk music. Finally, a coffin is burned on a bonfire, which signifies the end of winter.Wikimedia Commons
14 of 27

Maslenitsa is an Eastern Slavic religious and folk holiday that takes place the last week before Great Lent and which marks the end of winter. The holiday is celebrated by eating pancakes (or blinis), sleigh rides, snowball fights, organized fistfights, and sometimes dancing bears. On the last day, Sunday, people ask for forgiveness and often burn a straw woman, Lady Maslenitsa, who represents winter.Wikimedia Commons
15 of 27

Day Of The Dead

During the Day of the Dead, celebrated all throughout Mexico, people visit their dead relatives at the cemetery, But they just don't visit; they bring the deceased person’s favorite foods and drinks, they build altars to make offerings, and they share funny stories and anecdotes about the departed. More specific rituals and traditions vary from area to area but, in most cases, people take to the streets dressed and painted as flamboyant skeletons.Chris Jackson/Getty Images
16 of 27

The Frozen Dead Guy Days, held in Nederland, Colo., celebrate the preserved, frozen corpse of one man: Bredo Morstol. His family hoped to create a cryogenics facility in Nederland to preserve the body for good, but when the plans fell through, it was feared that the body would thaw. So, locals and the town government came together to keep the body frozen — and now they celebrate with things like live music and coffin races every year.Kent Kanouse/Flickr Commons
17 of 27

Every year on Saint Sebastian Day in Piornal, Spain, locals throw turnips at a devil-like monster known as Jarramplas. The role of Jarramplas is so highly desired that locals sign their children up at birth in order to secure a spot on the 20-year waiting list. The strange, centuries-old tradition has unclear origins but may symbolize the elimination of all that is evil from the town. Pablo Blazquez Dominguez/Getty Images
18 of 27

Lewes Bonfire celebration, held in Lewes, England, is one of the largest of its kind in the world. The festival commemorates Guy Fawkes as well as the memory of 17 Protestant martyrs burned at stake for their religious beliefs during the Marian Persecutions of the 16th century. In remembrance, 17 crosses are carried through town, a wreath is laid on the war memorial and women’s and men’s flaming tar barrel races take place.Wikimedia Commons
19 of 27

Nyepi festivities take place each year as part of Bali's New Year’s celebration. The whole island shuts down for 24 hours, meaning no traffic, work, pleasure, or fire. Electricity is used sparingly and neighborhood watch groups patrol all day to ensure compliance with the above rules.Windi Eka Setiawan/Flickr
20 of 27

The Cheung Chau Bun Festival was born out of a severe plague that shook the island of Cheung Chau in Hong Kong. According to local legend, the plague ended only after the locals paraded with statues of deities on the streets of the island, begging the god Pak Tai to put an end to their misfortune. The highlight of the festival is the bun scrambling competition which involves participants climbing a bamboo tower covered with buns.Wikimedia Commons
21 of 27

Night Of The Radishes

Each December the city of Oaxaca, Mexico, holds an event known as the Night of the Radishes during which both amateurs and professionals carve huge radishes in an attempt to create a masterpiece and win an approximately $650 prize. Such radish carving began as a way to attract customers at the annual Christmas market but then evolved into the event we have today.Wikimedia Commons
22 of 27

The Hindu Thaipusam Festival is dedicated to the god Murugan, the war god and destroyer of demons. On this special day, people bring milk, flowers, and fruit to the god but the most devoted followers pierce their bodies with hooks and skewers and some even attempt to pull heavy objects with the hooks attached to them so as to appease god Murugan and enter into a trance.Wikimedia Commons
23 of 27

Quema Del Diablo, "The Burning Of The Devil"

Every December before the Feast of the Immaculate Conception, people in Guatemala celebrate “Quema del Diablo” during which they “burn the devil” which is represented by bonfires of trash.Surizar/Flickr
24 of 27

Before midnight on Hogmanay, celebrated on New Year’s Eve in Scotland, people must have their house cleaned (including the fireplace) and their debts cleared as they enjoy fireworks displays and torchlight processions. After midnight, the most important thing is “first footing” in which good luck comes to you if the first person to enter your house is male and he brings with him coal, shortbread, salt, black bun, and some whiskey.Wikimedia Commons
25 of 27

In England, the Straw Bear Festival takes place on the Tuesday following Plough Monday, the traditional beginning of the agricultural season in January. A local is dressed up as a straw bear and is taken around town alongside a procession of dancers and performers. The bear costume is eventually burned so that a new one can be created next year.Richard Humphrey/Geograph.org.uk
26 of 27

Up Helly Aa is a fire celebration held in the Shetland Islands of Scotland. It marks the end of the Yule season and involves locals marching through the streets dressed in Viking costumes and holding lit torches.Wikimedia Commons
27 of 27 In most cases, holidays mean a day off and an excuse to celebrate, two things that human beings generally love. So it comes as no surprise that we all look forward to holidays immensely as we mark them in our calendars and make our holiday plans with friends and family.

But while we all love holidays, these festivals and celebrations look rather different depending on where you happen to be on planet Earth. In fact, every corner of the globe celebrates some truly weird holidays, festivals, and celebrations year in and year out.

Some of these holidays stem from cultural and religious traditions. Others were created for commercial purposes — when else are you going to buy ridiculously tacky greeting cards and heart-shaped candy if not on Valentine’s Day? Business is slow at that time of year but for one day, restaurants and shopping centers rejoice as people queue to let their loved ones know that they do love them after all.

If you’re feeling like your life could do with a little more celebration — and bizarre festivals at that — why not try exploring the world's various customs by experiencing some of the weird holidays that this planet has to offer?

Watch naked men struggle to get a hold of a sacred charm that will guarantee them good luck for the year at the Hadaka Matsuri Festival in Japan. Eat blini while you look upon dancing bears and organized fistfights at the Maslenitsa celebration in Russia. Or enjoy a day of silence during Nyepi in Bali where both work and pleasure are prohibited for one whole day.

From Japan's penis festivities to the baby-jumping revelry in Spain, experience some weird holidays and bizarre festivals from around the world in the gallery above.

After this look at weird holidays and bizarre festivals from around the world, see what it's like at the world's most fascinating nude festivals and events. Then, read up on China's controversial Yulin Festival, which includes the killing and eating of dogs.