Since coming under fire, the hunter has taken the photos down, though he insists each of his kills was legal. 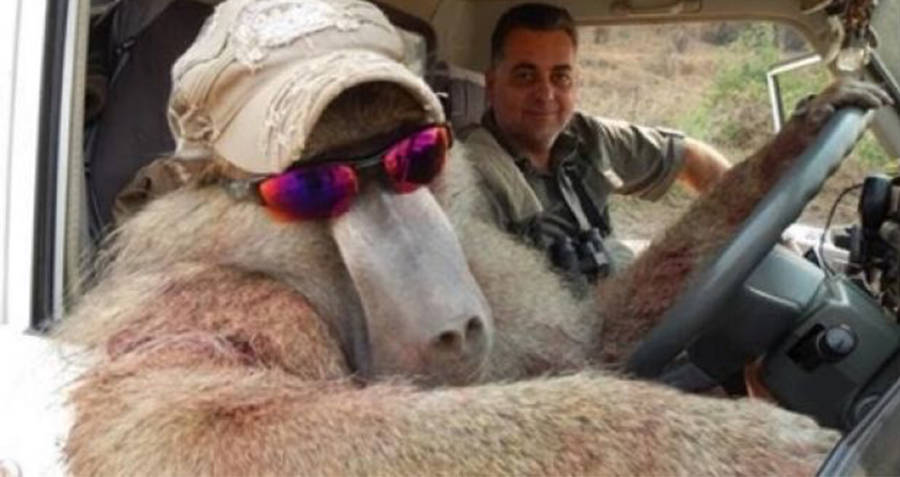 Nick Haridemos, posing in a jeep with the baboon he shot.

Have something interesting to say about this hunter? Tell us below!

A businessman from Canberra is under fire from animal rights groups after he posted a series of photos from his past few hunting trips.

In one particularly controversial photo, land developer and avid big game hunter Nick Haridemos is sitting in the passenger seat of a jeep, while the body of a dead baboon, dressed up in sunglasses and a baseball hat sits in the driver’s seat with one hand on the wheel and the other hanging out the window.

In addition to the photo of the baboon, a series of other photos have emerged, showing Haridemos posing with trophies from multiple safari trips. The photos were posted to an online forum that hunters use to report kills made around Africa.

The photos show Hariedemos surrounded by bloodied hyenas, posing with a dead elephant, and carrying the full ivory tusk of an elephant over his shoulder.

According to Haridemos’ lawyer, all of the hunting trips were legal, and the game was regulated.

“Mr. Haridemos has, on occasions, engaged in the activity of ‘conservation hunting,'” his lawyer said. “This is a regulated activity, which is undertaken in accordance with licenses and quotas issued by the relevant country, and is conducted in a manner that does not pose a threat to any endangered species.” 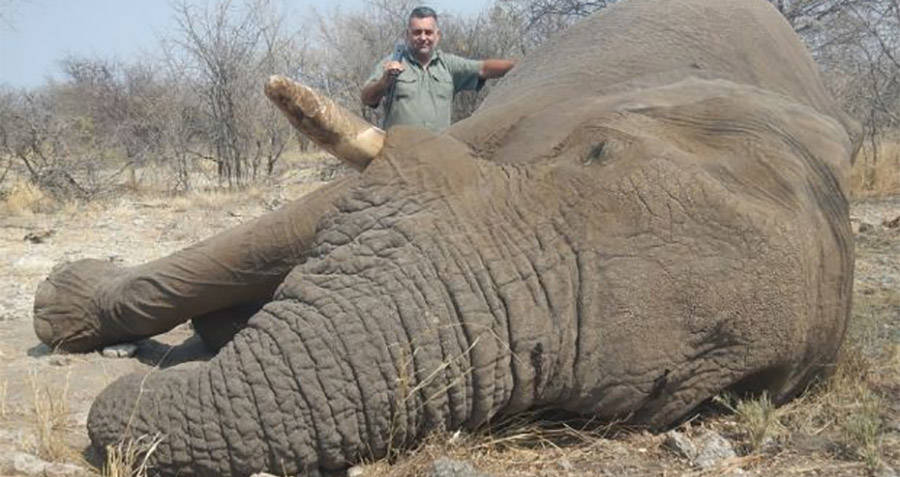 The Canberra TimesNick Haridemos with an elephant bull he shot and killed.

The Canberra Times reports that the Nyae Nyae Conservancy, where at least one of Haridemos’ hunts took place, has been granted hunting quotas from Namibia in the past, and has been running legal hunts since 1998.

Despite the legality of the kills, animal activist groups have been lashing out at Haridemos, and other game hunters.

“Most people are repulsed by trophy hunters posing for pictures with slaughtered wildlife,” said Nicola Beynon from the Australian branch of the Humane Society. “The ivory trade is sounding the death knell for African elephants.”

A spokesperson for PETA Australia also weighed in on the photos, denouncing trophy hunters as a whole.

“With boundless opportunities for amusement, it speaks volumes that such people get a thrill from gunning down, and turning into objects of ridicule, other individuals who ask for nothing out of life but the chance to live it,” she said.

The post where the photos were shared also included detailed descriptions of the safari, and of each individual kill. In one post, the death of the baboon from the photo is described.

Since the photos gained negative publicity, they have been removed from the Photobucket account to which they were originally posted.