Man Admits To Shooting, Then Running Over Bald Eagle

The killer said he was "upset [the eagle] had been hunting and taking fish from a pond." 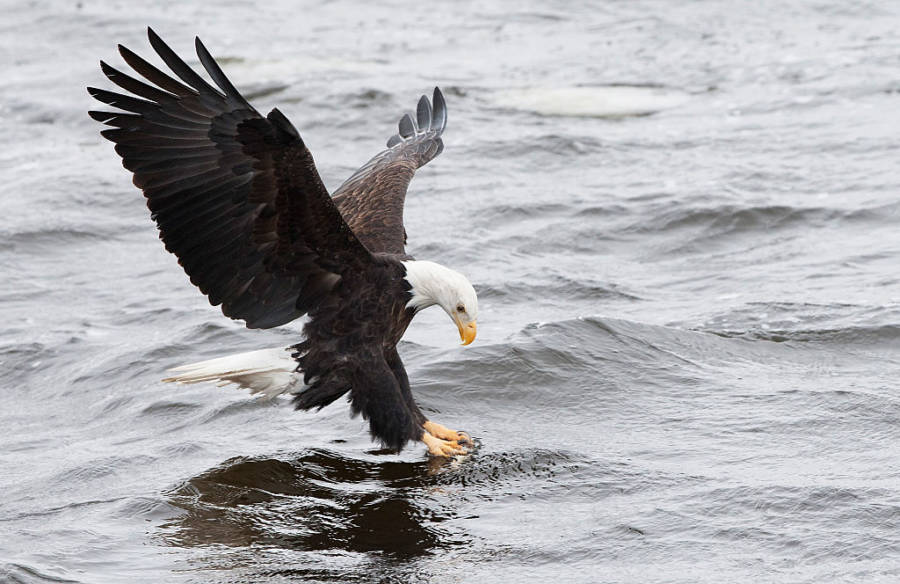 Regardless of how you feel about the U.S. right now, it’s probably best you don’t take it out on our national bird.

Though political animus didn’t lead Virginia resident Allen H. Thacker to shoot down a bald eagle and then run it over several times with his ATV on Tuesday, it’s still a pretty rough scene to imagine.

Thacker pleaded guilty to killing the bird on Tuesday, saying he was “upset it had been hunting and taking fish from a pond located on his property,” according to statements filed in the plea agreement.

The eagle’s natural hunting behavior was apparently frustrating enough that the 62-year-old felt obligated to shoot it down with .22 caliber rifle.

After the initial shot, though, the story gets a little muddled.

Thacker claims to have “finished the eagle off” with a pistol after shooting it from the sky.

Thacker — who does own a red ATV — initially denied this part of the story.

The evidence, however, supports’ the witness’s claim.

A medical examiner reported that the adult male bird, which had apparently been in good health before the shooting, would probably not have died immediately from the gunshot wounds.

Instead, the examiner ruled the cause of death a blunt force trauma to the head.

“The medical examiner found no evidence that Thacker used a pistol to kill the bird as he had claimed,” court documents state.

Faced with these facts, Thatcher fessed up. He may have purposefully plowed down the symbol of the U.S. with a Yamaha Big Bear all-terrain.

While the bald eagle hasn’t been classified as endangered in the U.S. since 2007, it is still protected under the Bald and Golden Eagle Protection Act, the Migratory Bird Treaty Act, and the Lacey Act.

All of this legislation means that killing a bird (to say nothing of squashing it with a recreational vehicle), is a federal offense for which Thatcher could face up to a year in prison and a $100,000 fine.

Thacker feels this is excessive.

“Too much emphasis is placed on bald eagle protection because the birds are a menace,” he reportedly told United States Fish and Wildlife Service agents.

Though most of us would disagree with this characterization, these robbed Canadian fishermen might be team Thatcher.

Catch of the Day: Bald eagle swoops in and steals a fish right off of a fishing boat. https://t.co/kbANI9CvAJ pic.twitter.com/6jWlWKvGX3

Next, read about the French military is training eagles to take down drones. Then, check out the oldest wild bird in the world that just had a baby at age 66.