Big game hunting is legal in some African countries, but the animals occasionally fight back against those humans who seek to kill them — as in this case.

YouTubeThe two hunters take aim at the pack of elephants.

A video of two hunters receiving a karmic scare after shooting an elephant in Africa has recently resurfaced — and is sure to please animal lovers everywhere.

The footage, which was obtained by News24, shows two male hunters stalking a group of elephants in the Nakabolelwa Conservancy in Namibia. The pair is armed with rifles and can be heard whispering directions to each other. Eventually, one man says, “hit it between the eyes,” which is when they take aim and fire away.

A single elephant, identified by the hunters as a bull, was shot multiple times. The animal tried to run away but eventually stumbled and crumbled to the ground. However, the rest of the elephants in the pack were not going to take the attack laying down.

The disturbing footage of the two hunters shooting an elephant in a conservancy in Namibia and subsequently being chased by the elephant’s pack.

Shortly after firing the first shot, the elephants begin to trump loudly and violently stomp. Then, the animals charge after the men. The hunters are forced to flee in utter terror. They sprint away from the angry elephants to safety while constantly looking over their shoulders.

After the brief chase, the elephants relent on their charge and go back about their business. Meanwhile, the hunters are nervously laughing at their near miss which could have left them trampled to death.

Corné Kruger, a Namibia-based big game hunter, and owner of Omujeve Hunting Safaris, told News24 that the disturbing footage was captured three or four years ago but only recently started making its rounds on the Internet.

The news outlet says that while hunting big game like elephants is “frowned upon,” it is legal in some African countries and regulated by laws.

“There is a small quota of elephants in the area and we only hunt two elephants a year,” Kruger said. 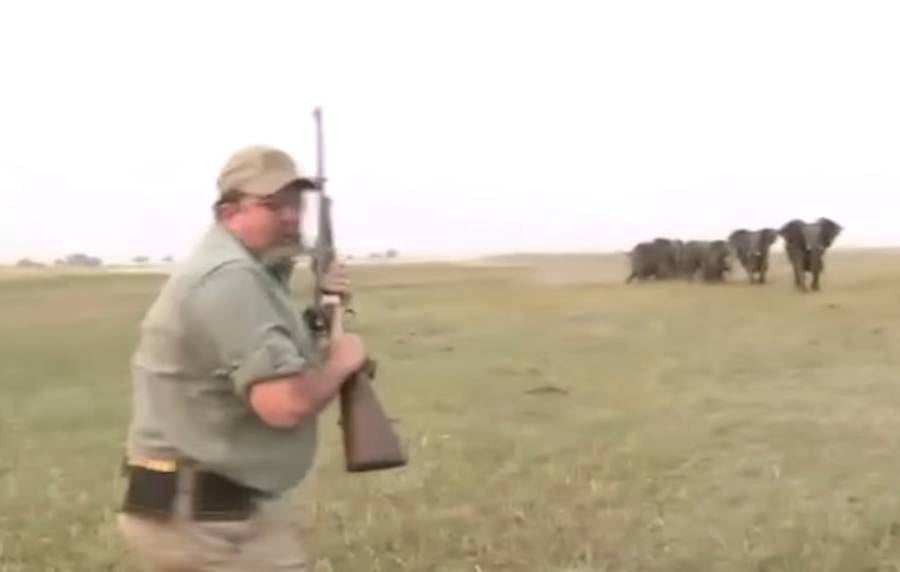 YouTubeOne of the hunters turning to run away as the elephants chase after him.

This is not the only time when animals have sought revenge against those that wish to kill them for sport. In August 2018, a California hunter was severely mauled by the black bear that he had just shot. After making the incorrect assumption that the bear was dead, the man left his perch and went to investigate and that’s when the bear attacked.

Sometimes, animal revenge can even turn deadly. In May 2018, a South African trophy hunter shot and killed a buffalo. As the hunter and his companions prepared to load the carcass into their vehicle, another buffalo from the same pack attacked and gored him in the groin with his horn. In his charge, the animal hit the hunter’s femoral artery, killing him almost instantly.

Big game hunting and poaching, in particular, are epidemics that have been responsible for dwindling numbers of animals across the world. However, little instances of karma such as this, in a small way, seem to tip the scale back in favor of the animals.

For more animal hunting horror stories, take a look at the poachers in Zimbabwe who poisoned and killed ten elephants. After that, learn how Cecil the Lion’s son was killed by big game hunters.