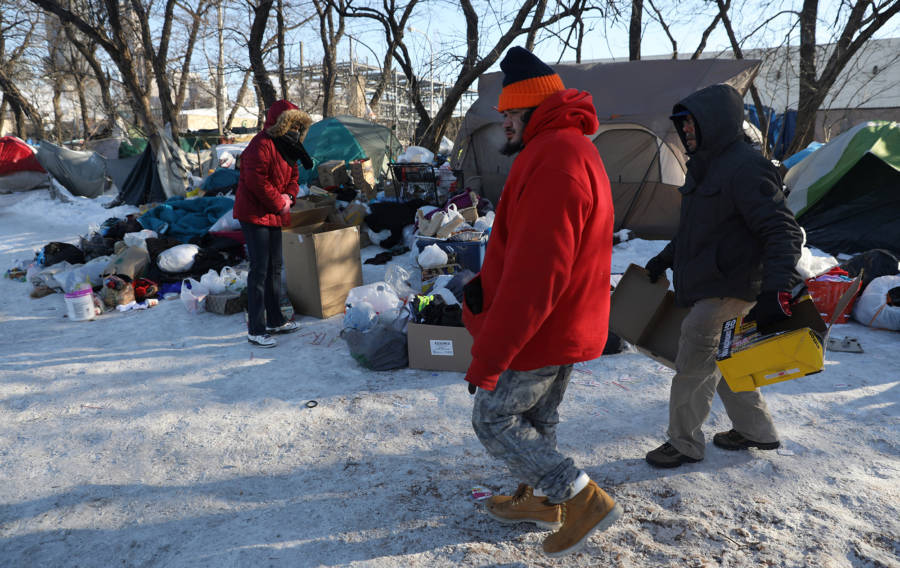 A good Samaritan in Chicago has offered to pay the hotel tab for 70 homeless people suffering through this week’s record cold after propane tanks were confiscated from a camp downtown and time was of the essence.

The brunt of this week’s polar vortex is borne most by those without a home. For the homeless camp on Roosevelt Road, a dozen tents, blankets, and propane tanks would have to make do. Enduring temperatures in the minus 20-degree range, however, is less of a difficult challenge, and more a matter of pure survival.

One of the propane tanks exploded on Wednesday afternoon, and though nobody was injured in the process, things were about to get a lot worse. Responding emergency crews discovered around 100 additional tanks at the campsite and decided to confiscate them for safety risks, the Chicago Tribune reported.

“When we got there, the fire was extinguished and they found all these propane cylinders,” said Fire Chief Walter Schroeder. “There was a significant amount of propane there, and with that many cylinders, that’s like a bomb going off.”

Fortunately, a yet unidentified man has offered to pay for enough hotel rooms to house 70 people who were trying their hardest to survive the challenges of the burdened campsite. Jacqueline Rachev, Director of Communications for the Salvation Army who’s been tending to the site this week, is relieved.

“Isn’t that wonderful? At least they’re warm and they’re safe,” she said.

The miraculous generosity on display here almost didn’t come to pass, as city officials contacted Rachev after confiscation of the tanks to ask for housing assistance. She was preparing to move everyone from the campsite to a Salvation Army warming center when a good Samaritan swooped in and considerably upped the ante.

“All the folks there,” said Rachev. “Some wonderful citizen is going to put all of them up at a hotel for the rest of the week.”

While that wonderful citizen has yet to be identified, the hotel is said to be situated in Chicago’s South Side. Only one man from Roosevelt Road’s campsite declined the offer and chose the Salvation Army’s warming center instead.

The harsh winter winds, freezing temperatures and lack of resources make living outdoors a day to day fight for survival. With seemingly tougher winters lying ahead, proper solutions need to be established that can aid people in the long-term. In the meantime, it’s heartening to know that there are still people out there who don’t want to be identified, don’t need the credit — they merely want to help.

After reading about Chicago’s good Samaritan picking up the hotel tab for 70 homeless people, see some of the most powerful photos taken during the Great Depression. Then, take a look at a new documentary chronicling the criminalization of homelessness in the U.S.