Photo Of The Day: You Only Think You Know What’s Happening In This Famous Image 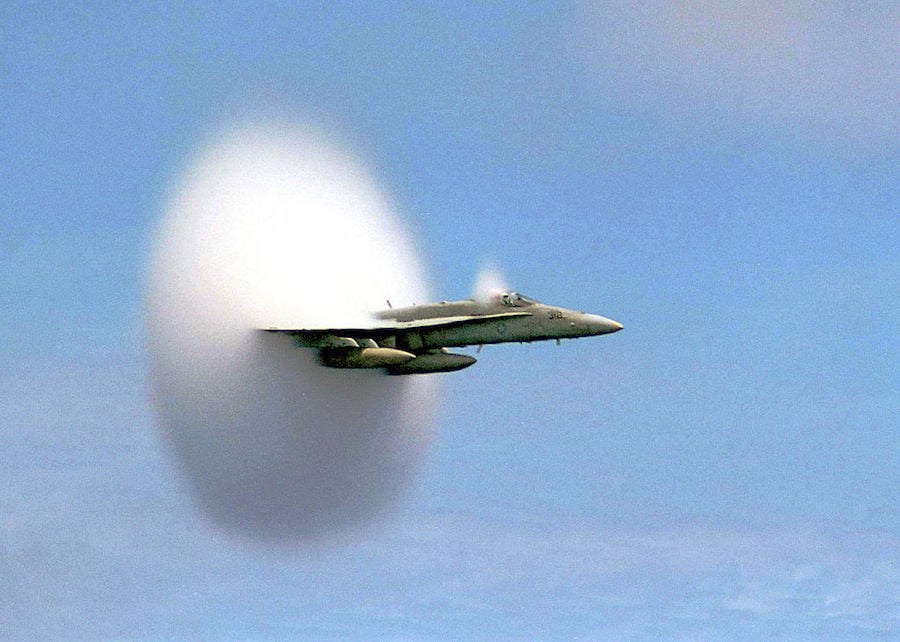 At first glance, the above photo of an F-18 Hornet bursting through a white cloud looks like something out of a comic book. All that’s missing is a text bubble saying “BAM!” or “ZOOM!”

At second glance, the photo looks like it shows a jet breaking the sound barrier. And for years, that incredible moment is what we all thought we were seeing (and what won the photo awards and acclaim). But even that explanation is not actually correct.

The photo was taken by U.S. Navy Ensign John Gay, stationed on the USS Constellation, off the coast of South Korea in 1999. He knew he had captured something special right after he’d finished shooting. But because this was 1999, he had to wait until he developed the film before he could see exactly what that something special was. When he finally saw the image, he knew he had a winner.

Gay then sent the photo to the Chief of Naval Information for an in-house Navy publication. From there, while Gay was still at sea, the photo’s fame began to grow. Sports Illustrated and Life picked up the photo, and the former then submitted it to the World Press Photo Awards, where it won first prize. Virtually every time the photo was printed, it was accompanied by a caption stating that it showed a jet breaking the sound barrier.

All those captions, however, were mistaken. That jet is traveling at supersonic speeds, but the photo, as Atlas Obscura uncovered, actually shows a fascinating phenomenon called flow-induced vaporization.

When the air is humid enough, the expansion wave at the wings will cause a kind of vapor cloud, like the one pictured above, to form. Then, the second shock wave at the plane’s rear will cause that vapor cloud to instantly disappear again.

The conditions must be perfect and the photographer’s timing must be impeccable. So while “flow-induced vaporization” isn’t as sexy as “sonic boom,” capturing the former is likely the more impressive achievement.

Although Gay’s photo doesn’t show a jet breaking the sound barrier, it still captures a rare, stunning event that few people ever get to see, let alone capture on film. It’s times like these that truth is even more impressive than fiction.