Unbelievable But True: The Maine Coastline Is Longer Than California’s Coastline

Officially, the Maine coastline is only 228 miles long. But... 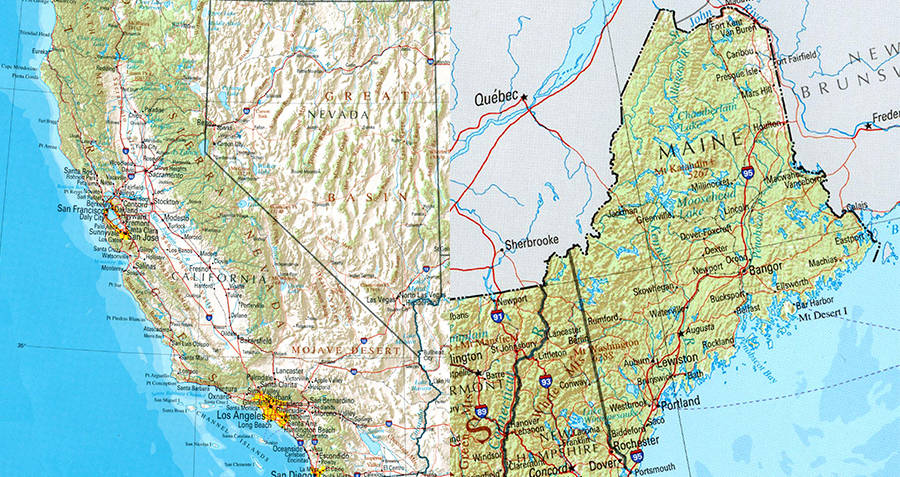 This seems like a dumb question because obviously California is huge and beach-y and Maine is comparatively tiny and pretty cold.

But actually, the Pine Tree State has more beachfront mileage than the Golden one — at least, it does when you add up all the little curves.

According to the National Oceanic and Atmospheric Administration (NOAA), California boasts a grand total of 840 miles of shoreline. Officially, Maine only has about 228. However, it turns out there’s another kind of shoreline that can be considered.

A state’s general coastline is simply a rough outline of the state’s coast. For example, the way a state would appear as a puzzle piece, with smooth edges and a clear line.

The state’s tidal coastline, however, is a much more precise number, and accounts for all of the little nooks and crannies that appear in the rough edges of the state. Neither general coastline nor tidal coastline accounts for any interior lakes, rivers, or streams, though the Great Lakes are considered to be coastal.

Including Maine’s tidal shoreline the shoreline of the state is actually a whopping 3,478 miles.

That brings Maine’s tidal shoreline to 51 miles longer than California’s 3,427.

As far as general coastline goes, only 30 of the 50 states have any coastline at all. Of those thirty, 23 of them have ocean coastline.

Ranking first for both general and tidal shoreline, is Alaska, with over 33,000 miles of tidal coastline. Then Florida and Louisiana, followed by Maine and then California.

The state with the least coastline, if you’re wondering, is the great state of Indiana — with a mere 45 miles of Lake Michigan shores, so few, in fact, that Indiana doesn’t even rank for general coastline.

Enjoy this article on the Maine coastline? Next, check out these cool photos of California beach and surf culture in the 50’s and 60’s. Then, read about the Irish beach that suddenly reappeared 33 years after vanishing entirely.